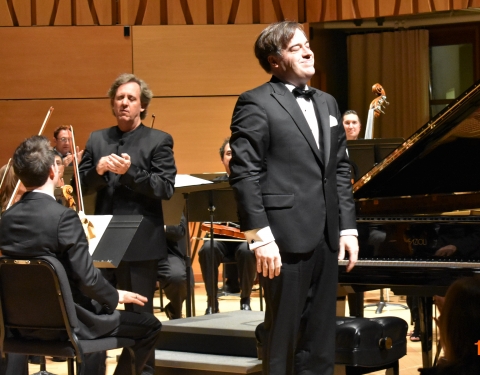 The Hotchkiss Philharmonic Orchestra played an all-Tchaikovsky program at Elfers Hall last Friday evening. This was the Gala Opening Concert of the year with guest conductor Marc Moncusí, founder of the Barcelona Modern Project, which he has conducted at Vienna, Madrid, Bremen and many other venues.

The orchestra is composed principally of Hotchkiss students and teachers with supplemental musicians (especially from the Hartt School of Music). They opened with a renowned and pleasing favorite, Capriccio Italien, Op. 45, written during his 1880 visit to Rome. Tchaikovsky had written a sketch of the work based on Italian folk tunes he had heard in the street during the first week of the year yet delayed the scoring until May when he had returned to Russia. The opening fanfare, according to Piotyr’s brother Modest, was a melody inspired by a nearby barracks heard daily. A version of that melody was employed by Richard Strauss in Thus Spoke Zarusthustra and slightly tweaked as a theme song by Alex North for the opening of the 1968 Stanley Kubrick film 2001: A Space Odyssey, based upon Arthur C. Clarke’s novel. The mostly imported brass section was there in full force and unified thrust. While sometimes criticized as a superficial postcard from Italy, this piece retains its allure as an opening icebreaker. Five Italian melodies wash over the audience as the tarantella finale delivers a forceful Slavic slam that inevitably produces a smile.

Variations of a Rococo Theme, Op. 33 (1876), for cello and orchestra, although composed earlier, remains a more ambitious work, nearly being a cello concerto. First composed as a piano-cello piece, the piano role was orchestrated while the cellist Wilhlem Fitzenhagen partly revised the work. Neither composer was satisfied with the result, but the work was abandoned and stood. The orchestra opens and the cello eventually joins in this extroverted romp. In the middle of the second movement, the cello takes over with a meditative solo, a virtuoso introverted digression as if complaining that the orchestra was superficial. The orchestra opens the short third movement and it quickly acknowledges that the cello was correct—the result being an agreeable and celebratory finale.

Noam Ginsparg, Hotchkiss class of ’22, the featured cellist played with great ardor and nuance. This was a public triumph for this young musician of whom all present expect to hear more. My companion, a former employee at the Hartt School, marveled at the impromptu use of a piano stool for the cellist. Cellists usually prefer a hard seat—to lean into the instrument. My friend told me that fans of Rostropovich often jokingly made bets on when he might tumble off his seat, but he never did. Ginsparg began playing cello just before his seventh birthday and he played from memory. He currently commutes to Manhattan on weekends for Juilliard pre-college classes. I can’t wait to hear him again!

After the break Fabio Witkowski appeared to play Piano Concerto No. 1 in B-flat minor, Op. 23 which, influenced by Mozart, follows the fast/slow/fast pattern established by Vivaldi. The opening of this concerto is impressively grand and demands so much from the piano player one wonders if he can continue. The more introverted lyrical second movement allows piano figuration to dwindle into silence and here Witkowski, drenched in sweat, excelled in capturing and inhabiting emotional tenderness after the thunderous first movement. Tchaikovsky’s melodic gifts remain astonishing. In the third movement the piano rolls out a wave of semiquavers and moving to climax produces double octaves with the orchestra resoundingly applauding and accompanying the piano in a finale that brings everyone to their feet. And so it was!

For encore, Witkowski played Franz Liszt’s third Liebestraum, which was originally written by Liszt as a love song to lyrics by Freilgrath and Uhland. Witkowski was so emotional that he couldn’t utter the title of the work. This was the piece he played at his inaugural debut concert with the Hartford Symphony Orchestra. His former master-teacher Luiz de Moura Castro, from whom he had learned this piece, was in the front row, now wheelchair bound. Witkowski played with such deep emotion that one could not imagine that there were ever any words adequate to parallel the music which rolled out with such pearled clarity and lingering nuance, so that all were amazed!